A Big Day, a Big Plan 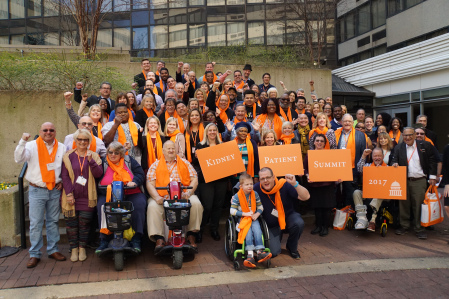 Day one of the Kidney Patient Summit began with a Facebook Live event featuring Kidney Advocacy Committee (KAC) member Ewo Harrell talking with NKF Senior Director of Health Policy Tonya Saffer. The video was viewed over 4,000 times on its first day. This was followed by KAC breaking off into groups to strategize and role-play for tomorrow’s meetings with members of Congress. The message was clear: donors are heroes that deserve to be protected, and the Living Donor Protection Act is a bill that requires no funding and should receive bipartisan support.

In the afternoon, Kent Bressler, of Kerrville, Texas, received the NKF’s Richard K. Salick Advocacy Award. The award is named after Rich Salick, a former pro surfer who underwent three kidney transplants and was a tireless advocate for kidney patients. It is the highest honor NKF bestows on advocacy volunteers.

Kent has been advocating for three years in Washington, DC, with his wife of 47 years, Catherine. He was diagnosed in 1982 with focal segmental glomerulosclerosis (FSGS), a disease that describes scarring in the kidney. This can lead to additional health problems including, but not limited to, large amounts of protein in the urine, loss of protein in the blood, high cholesterol, and high blood pressure. In 1987, Kent received a kidney from his brother Kip, a living donor who is also in attendance at the Summit. Still, for the past 28 years, he has been on immunosuppressive drugs that can have harmful, long-term side effects that he says he is beginning to experience. A registered nurse, Kent has represented NKF nationally, having participated in chronic kidney disease research reviews for the U.S. Department of Defense; and worked in Texas with NKF as a mentor for potential transplant recipients and donors. He is active in his church and has two daughters and four grandchildren.

The evening was capped off by representatives from the Alport Syndrome Foundation, Polycystic Kidney Disease Foundation, NephCure Kidney International, Home Dialyzors United and American Association of Kidney Patients sharing their organization’s efforts to improve the lives of kidney patients everywhere.